I LOVE growing vegetables. I usually start seeds indoors around March so that I’m ready to transfer the plants outdoors when the weather turns warm enough in May.

This year, we decided that we would try raised garden beds. Honestly, it was a decision made mostly out of laziness. We have a rototiller but the soil in our yard has so much clay that we end up having to add a bunch of sand just to make it workable and I hate having to sift out grass and rocks.

Along our back fence is the spot in the yard that gets the most sun, so that is the spot that we picked. We started with one bed. We found a good deal on standard concrete blocks. I thought that I would be able to grow some smaller plants (maybe onions or herbs?) in the holes of the concrete blocks. We stacked the blocks 2 high. I wanted to make sure that it was high enough that we would be able to use tomato cages for our tomato plants.

Then we broke down some cardboard boxes that we had saved, making sure to remove all of the tape. We even cut cardboard to insert into the holes around the outside. The cardboard kills the grass underneath, stopping the grass from just growing up into the garden. It also is biodegradable, so will end up helping the soil quality.

Then we filled the inside and the holes along the outside with a combination of soils (vegetable soil, miracle gro, raised bed soil). Then we went about planting! I had about 12 tomato plants, so those were the first that I planted. We also planted carrots, peppers, eggplant, basil and 1 cantaloupe plant (which I thought was going to die…..not take over that side of both raised beds!). I tried a few different plants in the small holes around the edge of the garden. The onions, chives, and spinach didn’t do well at all. I think that they might have done better if we had planted them earlier in the season when it was cooler. The green beans did very well in the smaller holes, except that the rest of the garden ended up growing so big that it overshadowed them!

We liked the first raised garden so much that we ended up building a second one! They are easy to maintain since they are higher off the ground. You don’t have to worry about what to add to the soil, because you can get the type of soil that is specific to what you are going to grow. Using the cardboard means that you won’t have to worry about weeds. We have plans to build a couple more next year! 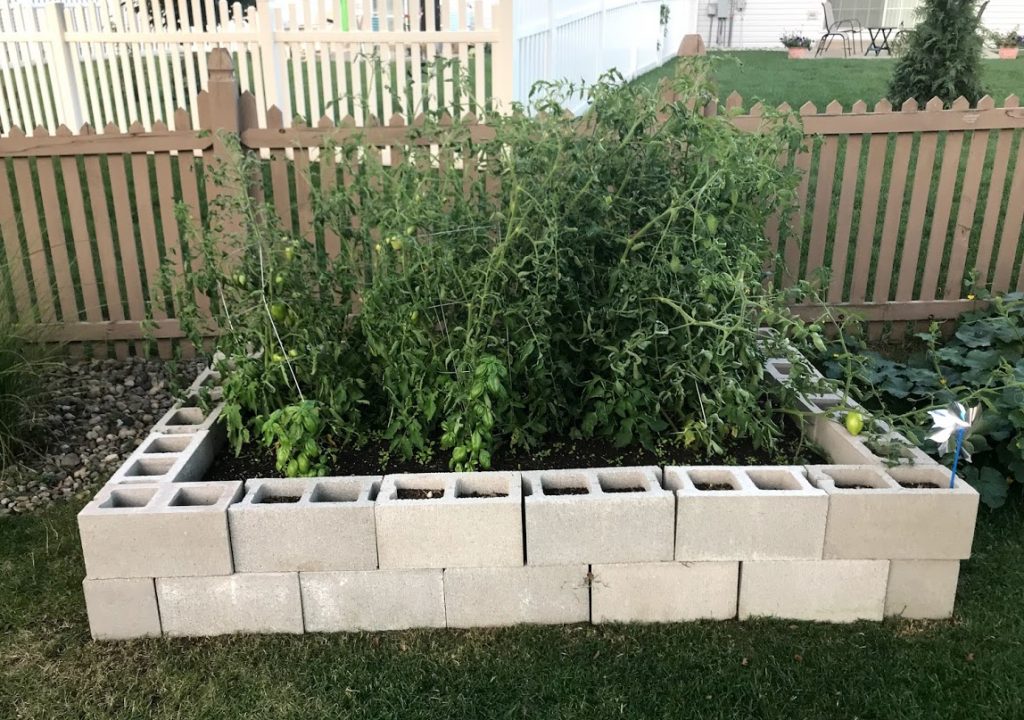